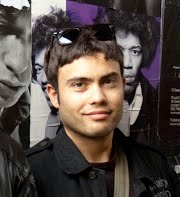 Francesco Conte was born in Popoli (PE,Italy) in 1984. He received the Computer Science and Automatic Engineering master degree and the Ph.D. degree on Electrical and Information Engineering from the University of L’Aquila, Italy, in 2009 and 2013, respectively. He currently is a Post-Doc at Intelligent Electric Energy Systems Laboratory (IEES), DITEN, University of Genoa,Italy. From December 2008 to April 2009 he was visiting student at the INRIA (French National Institute for Research in Computer Science and Control), Grenoble, France. His research interests cover with power system control, linear and nonlinear filtering, and mobile robotics. The results of the scientific work were presented in more than 10 publications in journals and national and international conferences. He has been a reviewer for journals and international conferences such as IEEE Transaction on Automatic Control, IEEE Transaction on Aerospace and Electronic Systems, IEEE Control and Decision Conference, IEEE American Control Conference, and IEEE European Control Conference.